A facelift is a surgical procedure to rejuvenate the middle and lower thirds of the face. It can be combined with a neck lift. A facelift addresses many of the changes seen in an aging face.

Who is a good candidate for a facelift?
These include individuals who are:
How is a facelift performed?
It is performed under local anesthesia with sedation or general anesthesia. In a traditional facelift, incisions are placed behind the hairline, skirt the anterior and lower part of the ear and enter the hairline behind the ear. Some of the variations like short scar facelift include incisions which are confined to the front of the ear. The surgeon works guided by the natural planes existing in the face. The lax structures are re-positioned such that it results in better harmony and balance. Drains are usually placed temporarily to help in removal of any collection at the operated site. The incisions are closed with the help of sutures which are removed at 4 days to 2 weeks. A facelift is a short stay procedure. Dressings are changed during follow-up reviews.

What are the variations of the facelift?
These includes:
What is fat grafting?
Fat grafting is the transfer of fat cells to the areas affected by volume loss. This helps restore the volume atrophy and give a more youthful look. Fat is harvested from the lower abdomen and thighs. Fat grafting can be combined with a facelift to improve outcomes.

What is the recovery following a facelift?
A facelift is a short stay procedure and patients can return home after an overnight stay. The dressings, drains, and sutures are removed during follow-up visits. It is common to have swelling at the operated site in the immediate post-operative period. Most swelling is gone by 3 weeks. Pain and discomfort can usually be managed easily with oral pain medications. Patients can return to light work around two weeks. Exercise can be resumed after a month.

What are the risks associated with facelift procedure?
They include the following:However, with proper attention to detail and technique such incidents are uncommon in patients who are in good health. Wound-related complications tend to occur more commonly in smokers.

What are the benefits of a facelift procedure?
This includes: 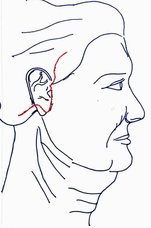 Incision (shown in red) lies inside the hairline and along the natural skin creases. Facelift rejuvenates the middle and lower third of face.